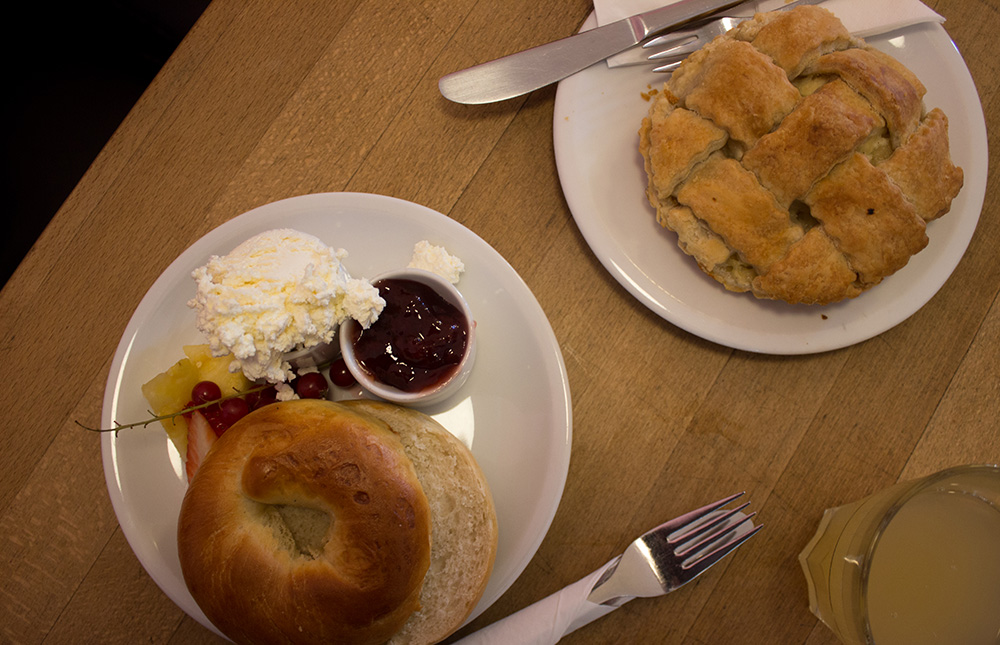 ​When you think New York, you think cream cheese bagels, no matter where you are. Right? That’s probably what Cynthia Barcomi thought, when she moved from Staten Island to the German capital Berlin. In 1994, she openend her first cafe “Barcomi’s Kaffeerösterei” in Kreuzberg; three years later “Barcomi’s Deli” in Berlin Mitte followed.

Though the Kreuzberg location focuses on coffee roasted in-house it’s actually famous for the New York Cheesecake. But that’s actually only one of their cake options. You can also order an apple pie – which is not a slice of an apple pie, but an actual small pie – or a slice of the carrot cake, the lemon cheese cake or the pecan pie, to name just a few. We actually went for the bagels, which are made in-house as well. Not 100% your New York bagel, but close enough. You can choose one of their savory and sweet topping combinations, like cream cheese with jam, or make your own. Even if you order your bagel with nothing but cream cheese, it won’t be boring. As New Yorker, Cynthia Barcomi knows that a bagel needs A LOT of cream cheese – and she delivers …

I personally liked the bagels, though my friend George wanted them to be chewier. I liked the consistency, but noticed that they’re more German-sized bagels than American-sized big ones. Nevertheless, I found the cream cheese bagel convincing. The apple pie was served warm, had a crunchy and super flaky crust, hiding the warm, soft apples. For me, it could have been a bit sweeter (or maybe with a pinch of cinnamon?). The consistency, however, was done well.

If it was the small cafe with its American vibes or the tables next to us, were English was spoken, the visit at Barcomi’s could as well have been in a small street in New York. But as the German that I still am, I was happy to see that founder Cynthia Barcomi also released quite a few cookbooks, featuring repices for cookies, pies, tartes and other delicious treats. Some of them are sold in the cafes itself, seven are also available in Barcomi’s online shop. There, one can also buy tea or the Barcomi’s in-house roasted cafe. But the shop’s range also includes kitchenware and Cynthia Barcomi baking sets. New Yorkers might not use their kitchen regularly, but in Germany we do – Cynthia Barcomi just gave us another reason.